PHOTOS: Parents lock up headmistress for charging admission, other fees

Some aggrieved parents of a government school at Iron City, a suburb of Kasoa in the Central region have locked up the headmistress over extortion.

The parents, who stormed the Iron City M/A basic school with their own padlocks, claimed the headmistress has been charging them exorbitant fees before admitting their wards. 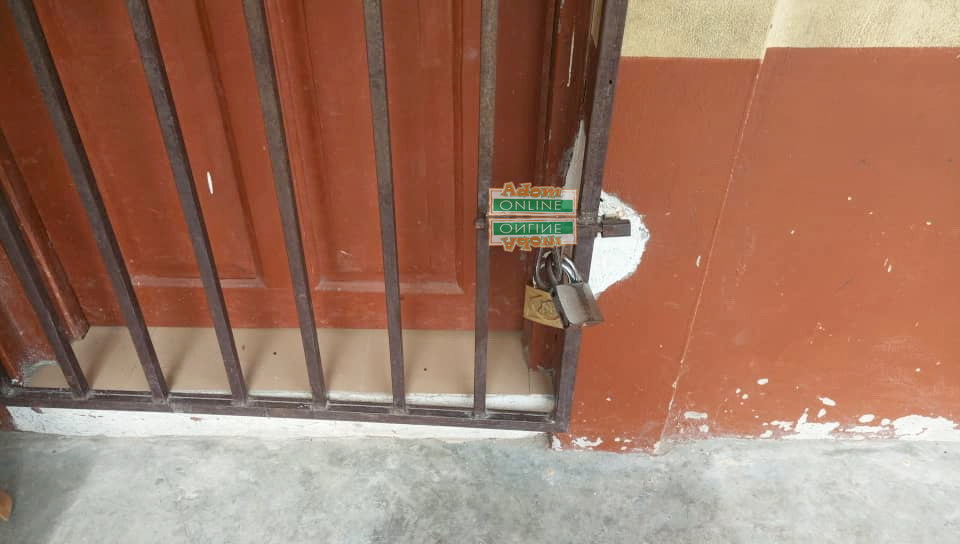 The office of the headmistress under lock and key

The parents have vowed not to open the door until the Ghana Education Service acts on the matter.

The parents, calling themselves Concerned Citizens of Iron City, accused the headmistress of charging GH?50.00 for admission which is supposed to be free.

“This headmistress is killing us; she charges about GH?250 for admission, school uniforms and others when government said it is free. We are suffering, so government should change her,” an angry parent said.

Meanwhile, the police in the area have been alerted and are moving to the school to restore law and order.

An Entrepreneur, Corporate Communications Executive and Philanthropist. Editor-in-Chief of www.233times.com. A Senior Journalist with Ghanaian Chronicle Newspaper. An alumnus of Adisadel College where he read General Arts. He holds first degree in Bachelor of Arts from the University of Ghana; Political Science (major) and History (minor). In 2015, he won a £35,000 postgraduate scholarship to study MSc Corporate Social Responsibility (CSR) and Energy with Public Relations (PR) at the Robert Gordon University in the United Kingdom. He is a 2018 Mandela Washington Fellow who studied at Clark Atlanta University in USA on the Business and Entrepreneurship track. His mentors are Rupert Murdoch, Warren Buffet, Sam Jonah, Kwaku Sakyi Addo and Piers Morgan